Due to their smaller size these fish have become popular for people who perhaps don’t have the space but still want to keep AC! They grow to around 10cm when mature and you could keep a small colony of them in a tank of no less than 140Liters which is considerably smaller than the minimum tank size required for peacocks and Haps. Most Mbuna have their adult colouration from a very early age compared to peacocks which makes them a popular choice for fish keepers. Another cool fact about these fish is that in most of the subspecies the male and the female will both display at least some colour with the males much more colourful. Although this makes it considerably harder to sex them specially as juveniles.

These are rock dwelling fish and it’s important to provide plenty of rocks and hiding places for them to feel secure; because of this however, they are usually more aggressive/territorial than other AC species and therefore it’s important to choose the correct tank mates. Experienced fish keepers can mix most Mbuna with other African Cichlids but the Yellow Lab and Rusty Cichlid are two of the recommended species to go for if you are new to the hobby and want to keep peacocks in the same tank. Other more aggressive Mbuna can be added later once your existing fish have settled in and established territories. Below is a list of the popular Mbuna typically available in most aquatic stores. 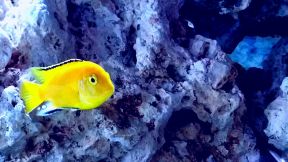 The Yellow Lab is an icon of the African Cichlid, by far the most well known and widely kept fish in it’s family, this attractive fish is one of the first names on the list when it comes to setting up an African Cichlid aquarium and that is by both experienced hobbyists and beginners. You can find some of these at almost any local or chain fish store you visit and they are usually very reasonably priced too!  Yellow Labs are very popular and great for beginners to the hobby, they are less temperamental than other Mbuna and are ideal for a mixed African Cichlid set ups, they also don’t grow too large so you could house them in smaller set ups than required for other African cichlids.

– Lodotropheus Sprengerae / Rusty Cichlid – A popular addition for beginners to cichlid keeping. Rusty Cichlids are actually very similar to the extremely popular Labidochromis Caeruleus in terms of behaviour and size. One of the least aggressive Mbuna these fish can be housed with other less aggressive Mbuna as well as peacocks and Haps. Hobbyists should not put overly aggressive species with Rustys because they could easily become shy and won’t be allowed to thrive. In any case an ideal aquarium will have a good rocky set up and soft sand so the fish can dig/nest.

Lodotropheus Sprengerae display a wonderful colour pattern which consists of a bronze (rusty) outer body and lilac/purple on the side which sometimes can appear blueish. The females are generally bronze/brown in colour with the faintest hints of purple visible at times. Along with Yellow Labs Lodotropheus Sprengerae is one of the easiest of all African Cichlids to breed so a great species for those looking to try their hand at breeding fish and taking their hobby to the next level.

– Maylandia Lombardoi / Kenyi Cichlid – This is a pretty large species as far as Mbuna go and as well as it’s larger size this is one on the more aggressive side of the species although not the most aggressive. Surprisingly the male and female of this species display completely contrasting colours! The male is yellow/orange colour with black vertical stripes which become faded and the female is a beautiful powder blue with black vertical stripes. This makes it much easier to tell the two sexes apart. Due to it’s larger size keeping these will require a slightly bigger set up than other smaller Mbuna.

This fish is not ideal for beginners in the hobby and it’s really best kept by more experienced fish keepers. It can be rather boisterous and territorial so tank mates need to be selected carefully and with caution. Avoid any of the more peaceful Mbuna such as Lodotropheus Sprengerae and certainly avoid 2 males in the same tank as one will not tolerate the other. In a large African cichlid community aquarium these fish would make excellent inhabitants as there will be plenty of swimming space and hiding places.

– Melanochromis Johannii / Electric Blue Johannii – One of the most attractive of all the African Cichlids, this beautiful fish has also become one of the more popular species among cichlid keepers. However, it is not really suitable for beginners as this is a fish that requires specific treatment and tank mates to be kept successfully. Although rather small it is important to consider appropriate tank mates and tank size. A relatively small set up of 140L is ideal for a colony and a larger set up is required to house with other African Cichlid species. Ideal tank mates are Labidochromis Caeruleus, other semi-aggressive Mbuna and some Aulonocara species. Fish of a similar appearance should not be kept with Melanochromis Johannii.

This is another species of Mbuna were the 2 sexes have completely contrasting colours! The males develop an intense electric blue body with black/dark blue horizontal stripes that make them quiet striking. The females are an attractive orange/yellow in colour, sometimes showing their horizontal black stripes but these are very much faded. Their beautiful appearance make both sexes desirable indeed. Hobbyists will be rewarded well if willing to keep water quality high and the parameters desirable for Melanochromis Johannii as this fish is rather sensitive to poor water quality.

– Metriaclima callainos / Cobalt Blue Zebra – One of the largest Mbuna that can grow up to 6inches although usually only reaches 5inches in aquaria. Males display dark to lighter shades of blue as they mature while females can also display a faded blue colour making them hard to sex especially as juveniles. These fish are among the popular Lake Malawi species and are best kept in Mbuna only set ups  due to their larger size and territorial behaviour. Rock work and plenty of hiding spaces are essential as with all Mbuna set ups.

Overcrowding your tank will help spread the aggression and keeping 2 males to 1 tank should be avoided unless the tank is larger than 200Liters, even then it would be best to keep a single male specimen to multiple females. Other varieties such as plain white cobalt zebras and some with vertical black bars along the body are also available though rare. 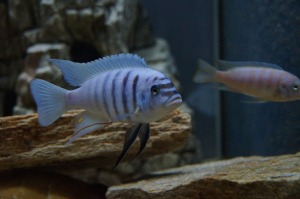 – Melanochromis Auratus – Auratus Cichlid – This is one of the most beautiful of all the African Cichlids and both sexes show impressive colours. Male adult colours are black with white or blue horizontal stripes while females as well as juveniles are yellow/gold with black horizontal stripes and they definitely stand out! In fact their beauty is such that some beginner AC keepers end up buying them purely for their looks without knowing their true colours so to speak. Auratus are notorious for their aggressive nature described by some as the most aggressive Mbuna available, of course this depends on the individual fish as they will have varying levels of aggression but it is certain that 2 males of this fish will not tolerate each other so if keeping them go for a ratio of 1M to 3F.

Keeping a single male with other Mbuna can work too but avoid any other Melanochromis and similar looking fish. Females are slightly less aggressive if kept singularly. All in all keep these fish with caution and provide plenty of hiding spaces in a overstocked tank to spread aggression, not recommended for beginners but can be very satisfying for intermediate to advance aquarists.

Yellow Tail Acei don’t get very big and can be kept in smaller African Cichlid set ups and their rather calm temperament makes them even more ideal and sought after to hobbyists. It is advised not to keep this fish with overly aggressive Mbuna to avoid them being bullied but they thrive when kept with less aggressive species such as Labidochromis Caeruleus. Breeding this species is not too difficult but conditions such as temperature and water parameters must be met as well as appropriate tank mates selected. Acei are one of the few Mbuna that will tolerate other males of the same species given plenty of rock work and areas to escape.

– Pseudotropheus Socolofi / Powder Blue Cichlid – Pindani Cichlid – This species became one of the most popular and readily available of all the African Cichlids due to it’s beautiful appearance and somewhat calm temperament it is a great fish for beginner fish keepers as well as experienced hobbyists. Although not as well sought after now this is still one of the best all round cichlids to go for! The Socolofi doesn’t get too big and both the male and female show colour all be it the male a striking powder blue (hence the name) and the female a more dull version of blue.

This is not a particularly aggressive species when kept with appropriate tank mates but is not easily bullied by more aggressive fish so it opens hobbyists up to a variety of options when it comes to selecting tank mates. Labidochromis Caeruleus is a perfect tank mate for almost any African Cichlid but other Mbuna and Aulonocara species can be great additions in larger tanks. Do not keep these fish with docile Mbuna like Yellow Tail Acei as they have been known to pick at and eventually kill them.

– Labidochromis Sp. Hongi / Red Top Lab – This is an attractive fish classified in the Labidochromis family which also includes the Labidochromis Caeruleus (Yellow Lab) and Labidochromis Chisumulae (Chisumulae Cichlid). The fish in this family are rather beautiful and unlike other African Cichlids the females are not dull in colour. Red Top Lab females are also attractive sharing the same purple/blue hue and sometimes stripes (usually on mature females) as the male, but the male colours are of course more prominent and noticeable. The dorsal and pectoral fins of this fish are a fiery orange which is also found on the edges of the tail fin.

This is a mouth brooding species like many African Cichlids are and the male will readily create “nests” or use caves and hiding spots to lure females to mate. It is important as with other Mbuna species that the tank provides a sandy bottom and plenty of rocks to complement the fishes natural behaviour. Males of this species are larger than the females and display more striking colours. Labidochromis Sp. Hongi males are very territorial and often aggressive towards their females so multiple females must be kept with every male for breeding purposes. Any set up unless large enough should be reduced to housing one male only.

– Labidochromis Chisumulae – Chisumulae Cichlid – This is another attractive member of the Labidochromis family that is usually smaller than it’s closest relatives the Red Top Labs and Yellow Labs. This species shares the same traits and behaviour with these 2 species and if kept with mixed sexes of multiple Lab species crossbreeding is a real possibility. Keeping each species with both male and females of their own will reduce the chances of crossbreeding. The Males have a beautiful light blue hue to the body with dark (black-purple-ish) vertical stripes, the older and more dominant the fish the more prominent the colours. Females lack the stripes and are generally white-silvery in colour which some people might think are dull but I think they are also very attractive.

Males are territorial and providing rocks and hiding places in key to keeping this fish successfully. They do well in a well stocked tank with other Lake Malawi Cichlids specially other Mbuna. These are relatively rare to find in the UK compared to the more popular Yellow Lab.