These are fantastically coloured fish and appropriately named; chances are any colour you can think of there is a Peacock for it. The majority of these fish have vertical bars running along the length of the body, their fins sometimes bearing these bars too. Depending on their age, mood, social hierarchy and water quality they can change their colours! An alpha adult male will have fantastic bright, full colours showcasing his dominance given he and the water are in prime condition. Cichlids can loose their colour somewhat if their place in the hierarchy drops (this does not mean only the dominant male will show colour) or if they are ill or perhaps suffering from poor water quality.

Females are generally more dull in colour being black or grey in most cases and you can just about see their vertical bars on the body while juveniles tend to start with faded colours of the adult fish they can sometimes be similar to females in appearance. It’s easier to tell the sex of fish approaching adulthood as by that stage any male would have showed or started to colour up. Venting the fish is probably the only way to be certain of it’s sex while still a juvenile.

For best results avoid keeping 2 males of the same species in the same tank (e.g. 2 male Red Shoulder Peacocks) and overstocking is recommended to spread the natural aggression of these fish. When overstocking make sure you have sufficient filtration and keep to a strict water change schedule. Using air pumps will also help oxygenate the water if the tank is overstocked. Due to the extreme popularity of these fish world wide the same fish may be sold under different names depending on where you go so it can work a treat if you know their Latin names. Below are some of the most popular peacocks in the hobby.

– Aulonocara Jacobfreibergi / African Butterfly Peacock – This one of the most attractive and sought after species of Peacocks and very popular among African Cichlid keepers due to their larger size than other Aulonocara and their beautiful colours. There are several varieties of this fish available with different colours but the most popular is the Eureka Red Jacobfreibergi which displays a bright orange/bronze body with a white blaze on the dorsal fin as well as shades of blue around the lower body making this fish quiet striking indeed specially in adulthood.

This is actually one of the larger species of peacocks and will need to be provided with appropriate space and tank mates. It is best kept to a single specimen in a mixed tank, in really large set ups however, you could keep more than 1 male. For breeding purposes a single male should be kept with a harem of 3-5 females. Ideal tank mates are other Aulonocara and less aggressive types of Mbuna that do not resemble a similar appearance. It can take a while for peacocks to reach maturity and display full colour so if buying juveniles please be patient!

– Aulonocara Sp. OB Peacock / Orange Blotch Peacock (OB) – One way or another chances are you either know about this fish already or you will once you get into the hobby of keeping African Cichlids and that’s because this is a fish that is divisive among hobbyists. One of the most popular of all African Cichlids the OB peacock is extremely desirable and sought after but it is not a naturally occurring species in Lake Malawi, rather it’s a man made species, a hybrid. People have different opinions on this subject matter which is why this fish is not to everyone’s liking. The OB stands for Orange Blotch which explains the appearance of the fish.

This fish has now been around for so long that it has almost become one of the naturally occurring fish available in the hobby. Adult males display colourful blotches with shades of brown, orange, yellow and blue and sometimes red visible. Each specimen may display a different mixture of these colours in varying intensity making each fish truly unique. Ideal tank mates are other Aulonocara and less aggressive Mbuna or Haps from Lake Malawi. Tank mates should be chosen carefully. 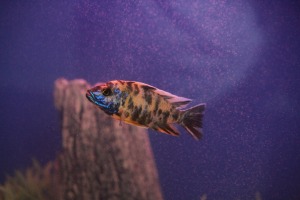 Male OB Peacock to the right of picture approaching adulthood.

– Aulonocara Hansbaenschi / Red Shoulder Peacock – This is a species that has been sold under a few different names probably due to the different colour variations that occur all of which are beautifully attractive. This species is mainly found with blue on the body and red/orange near the head area and gills hence the name “red shoulder”. It is a desirable species but one that breeds rather easily so avoid keeping females with this fish if you want to avoid breeding. Aulonocara Hansbaenschi are really best kept in a male only aquarium as there is a high chance of cross-breeding with other Aulonocara females. To breed pure strains of this species go for a colony of 1 male to several females in a set up of their own.

This is not an aggressive fish and will struggle if kept with overly aggressive African cichlids such as some types of Mbuna. It is best kept with similarly behaved species like other peacocks and less aggressive Mbuna like Labidochromis Caeruleus as well some species of Haps.

– Aulonocara Stuartgranti / Grant’s Peacock – This group has so many colour variations that you it can become confusing so as to what you are getting. The pattern of colours on all variation are essentially the same, with the head being electric blue and the body of a totally different colour such as the commonly found red, blue and yellow subspecies. Having said that different fish can fall anywhere in between that spectrum so for example on one fish the red may have a shade of orange to it or the yellow a faded shade of green etc…Some will have a fully blue head others half blue and half the colour of the body so you are spoilt for choice!

These are beautiful fish specially as adults with their bright colouring. Peaceful for a cichlid so it is best kept with other peacocks and less aggressive Mbuna like the Yellow Lab. Avoid mixing aggressive Mbuna with this species. The Blue Ngara is one of the more common subspecies.

– Aulonocara Firefish / Strawberry Peacock / Dragon’s Blood Peacock – This is a hybrid species and does not occur in the wild like the OB Peacock. However, this is a more recent hybrid and has appeared online and in local aquatic stores under a few different names. It is still relatively rare but can be found online and/or from smaller aquatic stores as I haven’t seen this species in the big chain stores yet. It is similar in behaviour when compared to other Peacock species and grows to a similar size as well. It is possible that this fish will become increasingly popular among African Cichlid keepers due to it’s unique and striking appearance

Adult males develop a deep pink body almost entirely but visible are patterns of a powder blue colour which are more prominent on the tail and fins of this fish. Other variations such as orange coloured ones are also available. 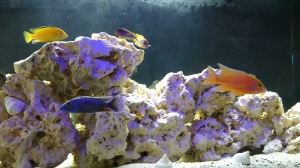 Male Strawberry Peacock to the far right of photo.