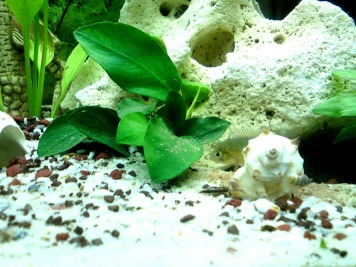 Shell dwelling African Cichlids are not too common in the aquarium trade perhaps because they lack the intense colouring of their much larger relatives. This means you are reduced to a few specialist or very large aquatic stores with a wide range of fish should you decide these are the fish for you. This is of course a shame and perhaps some day in the future these amazing little fish will become popular but the truth is most people don’t even know they exist with the exception of the more experienced hobbyists. Lake Tanganyika’s best kept secret, shell dwellers offer a different dynamic to the larger more popular cichlids found in the lake such as Frontosa and what’s great is they don’t need a monster aquarium to satisfy them!

As the name suggests these fish are shell dwellers meaning they are dependant on shells to feel safe, breed and nest. This behaviour is unique to these little fish and any aquarium containing them should have plenty of shells for them to make their home. Some of the typical African Cichlid behaviour can be observed in shell dwellers or shellies as they are sometimes referred to.

– Neolamprologus Brevis / Brevis Shell Dweller – This amazing little fish is one of the more unique shell dwellers when it comes to it’s behaviours. They much rather have a few suitable shells in the aquarium than a set up littered with them allowing them to make their home and position their shell to their desire. This often means they burry their shell in the sand. Sometimes the male and female of this species share the same shell which is probably the closest African cichlids come to mating for life and in fact a pair can live happily together in a 30L set up, something which is impossible with the larger African cichlids.

The Brevis Shell Dweller is an extremely peaceful species and in fact is easily bullied so large cichlids are out of the question. it is best kept with it’s own species or other docile Lake Tanganyika species such as Julidochromis Transcriptus. The Brevis is almost a creamy grey all over with hints of fluorescent blue and some yellow. The ideal set up will have a mixture of shells and rocks but can be quiet minimalist in decorations.

– Lamprologus Ocellatus / Ocellated Shell Dweller – The small yet full of attitude Lamprologus Ocellatus shell dweller is one of the more territorial of all shell dwellers. It can defend it’s small territory and shell vigorously and is boisterous to say the least. These fish are great fun to watch in the aquarium given the correct set up and tank mates as they display similar behaviours to the larger African  Cichlids plus more and take up almost no space at all! This shell dweller has some colour too which makes them all the more attractive. A subdued golden colour with hints of fluorescent blue can be observed on this fish.

Although it is not aggressive it is territorial and will chase away intruders so if keeping these fish it is important to provide at lest one shell per fish to help them feel secure and display their natural behaviour. Suitable for beginner fish keepers one thing is for sure the Ocellated Shell Dweller will bring a dynamic to the fish keeper that is rarely ever seen with other more popular species. A male and female can be kept together in a small set up alternatively a male can be kept with a harem of females. To keep a colony a larger tank is required so each male can have his own territory.

– Lamprologus Speciosus / Speciosus Shell Dweller – This species closely resembles the Lamprologus Ocellatus in behaviour given that both species defend their shell and territory fiercely but both are not “nasty” species and they simply deter rather kill intruders. Having said that the ideal set up will be one that contains plenty of shells as well as open swimming space to allow territories to be built. The Lamprologus Speciosus does like to dig so a nice deep soft sand substrate is the ideal substrate and can help bring out their most natural behaviours.

This species can display an array of beautiful colours ranging from a yellow/creamy body with brown patches to displaying hints of purple and blue. Their fins are like those seen on Julidochromis Marlieri in that they are fan shaped and follow the outline of almost the entire body. These fins are made even more remarkable by some of the patterns and colours seen.

They can be observed swimming around actively most of the time and display some unique colouration among shell dwellers. The males have the best colour which is a creamy body with an orange blaze on the dorsal fin as well as hints of fluorescent blue along the body. The females are smaller in size but still display some colour. Because of their larger size these fish require a bigger set up compared to other Lake Tanganyika shell dwellers.

– Neolamprologus Multifasciatus / Multifasciatus Shell Dweller – These fish are some of the smallest of all the shell dwellers with males reaching a maximum size of only 2inches! These tiny fish however, are some of the most territorial and boisterous of all shell dwellers so they should not be underestimated due to their size. Neolamprologus Multifasciatus will defend their territory fiercely even against intruders that are much bigger than they are in size so it’s not surprising to know they are heavily dependant on their shell, where they nest, spawn and eat.

Neolamprologus Multifasciatus don’t have much in the way of colour but display grey/black vertical bars on a creamy body. This lack of colour can be off putting for hobbyists but they more than make up for it with their behaviour. Any aquarium set up for this species should have an abundance of shells as well as open swimming areas along the bottom. A nice and deep sand substrate will also encourage natural behaviour as this species likes to dig. 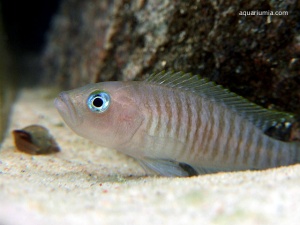